Today we are doing the “All Author Blog Blitz” 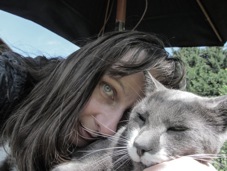 CREATIVE USE OF LANGUAGE IN NOVELS

Take it away, Nikki. It’s all yours! 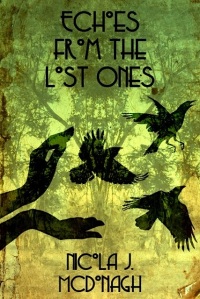 About a year ago, I had my first ever book published by Fable Press.

“Echoes from the Lost Ones”    a YA  dystopian/sci-fi novel.

I was unsure how people would react to it, because I used a slang-based language to tell my story   from the  heroine’s viewpoint. I took quite a risk writing in this style, but I knew that I wanted to    produce a story that broke  the mould and create a unique world with a unique voice. Below is an    extract from Echoes From the Lost Ones. Our  heroine has been kidnapped by a gang of lustful  youths:

“It was a good job the ‘dult turned up when he did or I’d be but floor pelt for sure. Those teens looked pretty fierce all right, with soil splattered on their cheeks, necks and foreheads; their eyes staring wild and full of threat. Bits of greenery and twigs stuck out from their matted hair and if I didn’t know better, I would think them part tree so much of the forest clung to their bods. Even me, the Roughhouse Champ, would be no match against all of them.

I’m tough but not stupid.

I recognised the one who tried to pinch my choc. He stood opposite me clenching and unclenching his fists. I saw his knuckles turn white each time his fingers bent, and when I caught his eye, he glared back. The others thrust their shoulders forward ready to pounce. I squatted all quick, arms around my head to shield me from a full on attack.

“Pull back ye bulls. Abide by the guidelines,” the ‘dult said and fanned them away with an air swipe. He turned and gestured for me to stand. I did. He walked over, folded his arms and moved his gaze up and down my bod. “Ye, ye are not one of us.”

I slowed my breath so as to appear all-calm like, and answered in a voice without quiver. “Well, nah. Visibly so,” I said, and then brushed some dirt from my pantaloons.

“Not suited for this rugged terrain.”

“That I am discovering with every shoe weary step.” “And yer eyes are of that peculiar blue that only the softies have.”

“Perhaps not, but ye resemble them in pale of skin and light of hair.”

The not-so-big ‘dult, for he was no more than a finger joint taller than myself, scratched underneath the filthy pouch that hung around his pleated skirt and said, “Name, girlie.”

I had hoped to end this chittle-chat without resort to mention of my moniker.

“Relinquish yer name or I will let the Nearlys have their frolic.”

“Let them try,” I said and put up my fists again.

“Wirt, what is she called?”

A flimsy looking youth with long straggly brown hair approached and looked between him and me. Then he stared into my eyes, blinked twice and backed away.

As you can see, the language is different from most other YA novels, so I waited for my first reviews with apprehension.  My first one was a 3* and yep, the reviewer didn’t like the language. So I thought, here we go; I’m going to get slammed for daring to be different. Now, I wasn’t actually upset that I got a 3* review!! That’s good isn’t it?  I was actually very pleased indeed. Then I began to get 4* and 5* reviews. Very, very pleased. My experiment with narrative payed off – for the most part. I still get 3* reviews from readers, and they pretty much say the same thing about not liking the language and finding it difficult to read. But, more people enjoy my quirky world and oddly use of English than don’t.

So I say to all who want to try and do something new with language – DO IT! You never know, it just might work.

Why not try using food. Seriously – why not?

I found a tin of spaghetti letters at the back of the under stairs cupboard, a few days out of date and dusty. I don’t remember buying them. I don’t remember ever eating said tinned convenience food in my life. A mystery to be sure. Anyway, I thought the birds might enjoy them and opened the tin. I poured out all the gooey letters and for some reason thought, why not write a Haiku using some of the pasta shapes?

My husband joined in and separated the letters – a messy business to be sure. Then we made some toast and began to play around with the pasta. My first attempts were a bit vague, and the poem I really wanted to do, I couldn’t because not all the letters were there.

Haiku I wanted to do:

Nourishing both mind and gut

A sea of ideas

But I came up with something in the end. 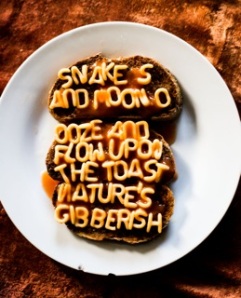 Well, it was raining outside, and…I don’t need to make excuses!

In case you couldn’t quite make out the letters – below the end result:

Ooze and flow upon the toast

Okay, that is a bit extreme, but what I’m trying to say is, don’t be afraid to experiment. You never know, you might just end up with a best seller like Anthony Burgess and his novel, A Clockwork Orange. He used language to define the difference between adults and the younger generation. Since my book is set in the future, as is A Clockwork Orange, I began to question why a lot of writers choose not to modify the language they use to create a sense of another time and place. It seems that in the future, vocabulary will remain the same and people will talk to each other exactly the way they do now. Which doesn’t really make sense, does it? The spoken and written word has changed over the years, and most authors have reflected this in their works: from Shakespeare to Bronte, Dickens to Faulkner, and James Joyce to Irvine Welsh. I overheard a conversation between three teenage girls. I texted a snippet of what they were saying to my friend, who has a fifteen year old, and she said that they were talking about a boy that two of them found attractive, but one of them didn’t.

So, if young people talk like this today, wouldn’t it make sense that hundreds of years in the future, people would be conversing with words that are different from the ones we use now?

In his novel, Nineteen eighty-four, George Orwell introduced words and phrases that were not  familiar to readers of that era, to create a futuristic realm where language is used as a weapon to  subjugate the masses: duckspeak, thoughtcrime, bellyfeel, doublethink, and speakwrite. Would it  have been such a powerful read if the author had not employed the use of such evocative words?  Who can forget ‘Newspeak’, or ‘Big Brother’?

In A Clockwork Orange, the use of slang is vital to the narrative to give credibility to this dystopian future. Alex speaks ‘nadsat’ a language that sets him and his friends apart from the rest of society.

“These grahzny sodding veshches that come out of my gulliver and my plott,” I said, “that’s what it is.”

“Quaint,” said Dr. Brodsky, like smiling, “the dialect of the tribe. “

So, bearing this in mind, when I came to write my novels, Echoes from the Lost Ones and A Silence Heard, I made sure that I used words that were appropriate for the world I was creating. Since it is written from the viewpoint of a seventeen- year -old, Adara, in the first person, it was imperative that her voice rang true in order for the characters to maintain credibility in this vision of the future. I created ‘Bubchat’

If you enjoy a read that is different from the usual dystopian/sci-fi novels that are around, then why not get a copy and see if you like my style.

Still not sure? Check out my book trailers for both novels HERE!

That was really cool, Nikki.  And you are right how each generation has picked up their own slang.

To learn more about Nicola and her books, check out the following links

And you can find all of Nicola’s books on Amazon

Echoes from the Lost Ones (Song of Forgetfulness) (Volume 1)

A Silence Heard (Song of Forgetfulness)

Today you can find me on Nicola’s blog for the “All Author Blog Blitz”, where I am comparing Athetes and Authors.

So check it out and if you’d like to tweet about us, please use the hashtags #aabb or #allauthorsblogblitz

And you can find out more about the All Author Blog Blitz HERE!

This was so much fun! Thank you, Nikki, for being my blog buddy!