Judging A Book By Its Cover Part 3 cont. And 5 More Covers

If your book is in print, is your back cover photo the same as the front or different? Or is it a panoramic photo, stretching from the front, across the spine, and around the back?

Today, Thursday (I always put together my blog posts the day before) at 5:30 p.m. pacific time, my blog has had the most page views (135 ) since I created my blog 🙂 And I want to thank all of you for that! And it’s still early 🙂  I haven’t received any covers for Saturday, so not sure if I will have a post for Saturday, but I will on Monday as we continue “Judging a Book By it’s Cover” Remember I would love to have all of you participate and share your blurbs. Once again I will post your front cover, or back if you prefer, a link to amazon or wherever you want, and your blurb, so that everyone can see what your book is about.  Chris Ward asked me to let all of you know his book “The Tube Riders” is FREE October 5-7. Which I did in the last post, but I wanted to remind you in case you want to pick up a copy.

Oh and I forgot to tell you I did a guest post for Paul Dorset’s blog! If you get a chance check it out

Hi Karen,
Your blog article looks awesome, and I thought my cover might be attractive enough to get your interest…
I am a professional graphic designer first, and writer second – although it would be ok with me if those things switched positions at some point. Truthfully they’re both tough positions, but I enjoy them both and you can’t ask for anything more than to love what you do.
The wings logo is tied to the content of the book and descriptions of it will be mentioned throughout the story, tying things together. The logo will remain the same on all the covers, though the sub name and cover art itself will differ from book to book.
The beginning of the story starts on Earth, in present day, in a familiar, seemingly normal way. The cover needed to tell the reader that, that’s not all there was. That the story was more involved, deeper, darker, more expansive. The artwork was created in Adobe Photoshop using photos, hand drawn and hand painted elements, blending and special effects to get the look I wanted.
http://www.amazon.com/Wings-Steele-Destination-Unknown-ebook/dp/B0072QWTK4
If you have any questions, please don’t hesitate to ask.
Best regards,
Jeff Burger
Thank you Jeff for participating!
***********************************************************************************************************

Good morning Karen, This is a book of mystery short stories so I wanted a cover picture that was, well, mysterious.  I remembered a few foggy street shots that a photographer friend of mine had taken and planned to use one of those.  Fitting the type around them proved a challenge and they were more horizontal than vertical.
As the deadline approached and the graphic designer was getting anxious, I went out in my own neighborhood one night with my Canon 50d and tripod and this was the result.

The title was easy.  More than half the stories here involve bad guys (crooks) and good guys (cops) but there are other stories as well.  And since this is flash fiction I thought it important to include information in the title that would explain that these were ultra-short stories.  So, it’s a long title, but it gives the reader a true idea of what’s inside.

Designer Don Markofski chose Agency FB font with a drop shadow and I liked the effect.

Wishing you a great evening Mark. 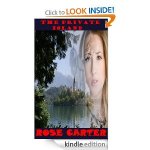 Hello, Karen,I hope you are still in need of covers to feature on your blog. If so, I have included mine as an attachment and its story below.
Designing the cover was surprisingly one of the more difficult tasks of creating “The Fox and the Fawn”. I decided early on that hiring a professional was not in the budget. Once everything else was finished, I sat down to design the cover thinking it would take only a few hours. There were more factors involved than I realized, and those few hours turned into more than two weeks. Finding the right image took some time, but finding the right font and color for that font that would work with the tone of the illustration took nearly a week. I realized just how important the right font and color is, and I probably tried nearly a hundred fonts and color shades before I finally settled on a bright orange, almost gold-colored, Ariel.The cover illustration was chosen because I felt that the scene says so much about the story. I also felt that there is a look of suspense; the fox is leading the fawn somewhere, but neither the fawn nor the observer knows where. Of course practical reasons also played a major role. I needed an illustration that featured both the fawn and the fox, but also allowed enough open space where I could place the title and my name as well as the name of my illustrator.I included two slightly transparent gray boxes for the text to sit on top of in order for the title and our names to be easily seen. The text appeared lost without these boxes, and if they were not slightly transparent, they would look out of place. The transparency allows for a more natural look rather than the appearance of simply being pasted on top of the illustration.The easiest factor was choosing a title. Since the principle characters are a fox and a baby deer, the title was provided by the story.http://www.amazon.com/The-Fox-Fawn-ebook/dp/B007SP25H6
Thank you so much!
Daniel Derasaugh
You are so welcome Daniel and Thank you!
***************************************************************************************************
The Silk Code written by Paul Levinson

The cover of my novel, The Silk Code, was designed by Joel Iskowitz – http://www.creativeshake.com/professional_details.html?MyUrl=JoelIskowitzI came up with the title as a combination of The Silk Road and DNA code – both of which play prominent roles in the novel.Joel choose the colors and the element of the cover – a Neanderthal figure, silk worms and silk, and DNA – all of which are major themes of the novel.The cover is attached.  I’d like it linked to its Amazon page http://www.amazon.com/dp/B0091W43JW/ref=nosim/?tag=dexter2a-20Thanks – Paul
=Twice Upon a Rhyme=
“perfect soundtrack for a lethargic spring day” – Shindig=The Silk Code=
“delivers on its promises” – NY Times2nd edition in July 2012  =New New Media=
Hi Paul. Thank you for joining us.