When I put out a call for interviews I was excited G.D. Ogan answered my call. You see G.D.  or Guy, as I call him,and I go back a few years. We are both members of the online “Outlaws Car Club” And I was surprised and excited when a mutual friend forwarded an email to me back in March letting me know that Guy not only had written his first book, but published it as well. So let’s take a look at what lurks in the mind of an old car lover, turned writer, turned published author!

Not really. My mother named me after “the father of the short story” Guy de Maupassant, a French writer of the early 1800’s. I looked him up to answer this question for the “interview.” I read that he wasn’t a fan of religion, while I see it as the cornerstone of one’s personality and of a functioning society. He was, however, credited with being dedicated to his mother, as I was; I retired early to care for her upon the death of my father. I would have preferred to have my middle name “Douglas” as my first name, as it was my father’s first name.

Write under your given name or pseudonym?

I write as G. D. Ogan, because I believe women are far more romantic than men and I’d like a potential reader to give my book a look before realizing it was written by “just a man.” While my Paranormal Romance-Adult book, “IMMORTAL RELATIONS,” is chock-full of exotic cars, and warfare, there is a lot of erotica as well as romance in it. If a lady loves different takes on vampires, I think she would LOVE my book and, if she has a male in her life who hates the genre’, I’d bet if he read my book, he would become an equally great fan of the genre’ as she currently is!

Is there a routine you go through before writing?

No. I’ve had Attention Deficit Disorder all my life (public school was torture, but ADD helped my graduate degrees) so multiple scenarios for dozens of subjects, including stories, are going all the time in my mind. In my books, I call it “thinking outside the box” or “multi-tasking.” I can sit down anytime, anywhere and start writing, because my “hard drive” has pages just waiting for fingers to come in contact with a keyboard.

Marijo, my mother, was an extremely talented and creative artist, and she worked in many mediums. Cecelia, my wife, has put up with me for 44 years – what endurance! As far as men go, Winston Churchill, who personified the backbone of the British people in World War Two as well as General George S. Patton, the General most feared by the Nazis. Both were sometimes their own worst enemies as far as public relations went but didn’t give a damn about “political correctness.” Ronald Regan, a real leader and honest man in the White House who did as much to help America as George Washington (who had turned down being a King) did in his day – all are heroes of mine!

I like books where Good defeats Evil, either historical novels or fiction. My favorites are “Debt of Honor,” “Executive Decisions,” and “The Bear and the Dragon.” While fiction, they’re filled with military and political scenarios that can become frighteningly prophetic and are themselves a “political education” into how the greed and malice of dictators ruins the world and warns that good men and women must stop them.

Do I have a favorite author?

So many great writers today, but if I must pick one, Tom Clancy (see the above trilogy), by himself, not writing with anyone else, is my favorite. I also love the erotica of Lisa Renee Jones’ “Hot Vampire Seduction,” quick, get a fire extinguisher!

Do I need quiet or to have background noise when writing?

I always prefer quiet when writing as my own mind (doing its multi-tasking) provides its own background noise!

Do I prefer the beach or the mountains?

As long as there aren’t any tsunami warnings a beach is fine (salt air, gulls flying, surf crashing, children and dogs frolicking in the surf, and maybe a few lovely ladies to admire), otherwise the Mountains offer serenity and the quiet I enjoy, as well as the unmatched beauty of nature.

When I see people being kind and loving to small animals, or a man and a woman holding the hands of a toddler, I hold out some hope for mankind’s future. If you read “IMMORTAL RELATIONS” you’ll better understand my fierce love of animals!

What is my favorite snack food?

I’ve been on the Advocare diet for two months (-50 lbs and -10 inch waist) so two rice crackers with health-store ground peanut butter, along with unsweetened iced-tea is it.

What freaks me out?

The fear that our country is falling into a Marxist Dictatorship and the public neither seems to realize nor seems to care – totally frightening!

The most unusual job I’ve had?

I retired from a position as a Psychologist with the Texas Dept. of Criminal Justice, to care for my invalid mother upon my father’s death. Dealing with convicted criminals inside a prison was definitely “unusual.”

Do you work on one or multiple novels at a time?

While my mind “multi-tasks,” thinking of many scenarios, I try to focus all my energies on just the story I’m currently writing – otherwise I think it might get confusing and short-change the reader. I think readers will see the scenario “switch” when my guardian vampires go from solving a nuclear terrorist act to saving Europe, Asia, and the World, from catastrophic radiation releases possible when the cap at Chernobyl fails or the destroyed reactor building topples at Fukushima, Japan, in “IMMMORTAL RELATIONS, LOVE & WAR,” the second book in the series. This last tragedy has been predicted as an “Extinction Level Event” WHEN it happens!

What do you like to do when you are not writing?

I enjoy my 1966 Mustang Convertible and my wife’s 1964 Studebaker Station wagon, called a “Wagonaire” because the rear of the top slides under the front of the top, converting it into a truck for hauling tall items like a refrigerator or a tree for planting. Both have modern engines, transmissions, brakes, suspensions, and steering for improved safety, gas mileage, reliability, and performance. I also have a Roush-Mustang, which with its new technology is very comfortable to drive.

Do I have anything new coming out?

As mentioned above, “IMMORTAL RELATIONS” remains the main title for my second in the series, sub title, “Love & War.” I talked with my artist friend about the cover last night. Gary’s face, in profile, will be at the upper corner looking down on his two lovely “owners” standing in front of “The Residency,” the castle in which the guardian vampire coven resides. I’ve asked that the sky be lighter so the “Immortal Relations” and sub-title (again done in Blood Red) will be easier to see than in book number one, we live and learn don’t we? Readers have said the first book is full of action, but they’ll think it is a “walk in the park” compared to the non-stop action contained in “Immortal Relations, Love & War.” Adam was the first full vampire child ever born in book number one, but others are born in book number two – read it to see how! I hope to have it available on KINDLE and AMAZON in the fall of this year.

Guy, Thank you so much for being here today. I look forward to your new book coming out and wish you much success with it. 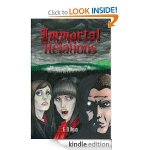 E-book in the UK