My Review of “American Goddesses”

American Goddesses is a novel by Gary Henry

When Gary asked me if I would review American Goddesses, I told him I am not very good at reviews.

I have a hard time writing a summary or description of the book.

People ask me all the time when I recommend a book, “What’s it about?”

And I tell them, “I don’t know how to explain it. Just read the book, you’ll love it!”

Now Gary is a reviewer and he’ll probably review my review. Hah!

Let’s just hope I get at least 3 stars!

Okay on to my review of 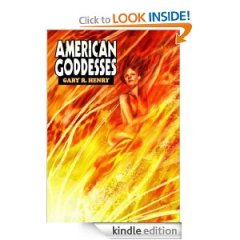 I enjoyed the story American Goddesses even though it did get a bit sappy towards the end. Now being an emotional female, I cried and hugged and shared the sorrow with the characters, but a guy would probably say, “Okay enough of the tears, just get on with the story already…. Alright a man hug. There are you happy now?”

American Goddesses is a story about two women, Megan and Trish, who volunteer for a medical experiment that could wipe out all diseases known to man or woman, from the common cold to cancer. What they get are super powers that complicate their lives in good and bad ways.

Gary did an excellent job of weaving the story so that you felt you were a part of it. You felt the emotions of the characters. You could see them just as clearly as if you were in Gary’s head as he wrote.

Would I recommend American Goddesses? Yes. Would I give it five stars? Yes, I would.

Pick up the ebook on Amazon here

I don’t think you’ll be disappointed. Now a question for you. If you could have any super power, what would you choose? Or do you want them all? And Guys…Ladies with Super powers are quite sexy! So get rid of that male ego and read American Goddesses!

Oh! And one last thing! Wait don’t go anywhere yet! You can find Gary here